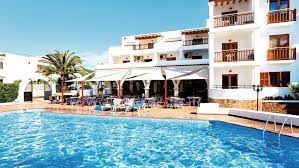 This whitewashed apartment complex may be small, but it gets big ratings on TripAdvisor for its friendly atmosphere. Plus there’s the great pool scene complete with a waterside restaurant.

The apartments are about a 15-minute walk from the shops and beach in Santa Eulalia. But there’s a smaller sandy beach that you can walk to in less than 5 minutes.

There are a total of 48 studios, one and two bedroom apartments at the C’an Sanso Studios complex. The apartments have 1 or 2 twin bedrooms, a lounge with 2 sofa beds, a kitchenette, a bathroom and a balcony or terrace. The studios do not have a separate bedroom are are furnished with 2 sofa beds and a pull-out bed.

All room types feature a fridge and microwave, a washing machine and ironing set, an oven and a gas hob, tea/coffee making facilities, a safe, a TV (with some English channels) and a ceiling fan.

This place has its own pool, overlooked by a restaurant serving international favourites. There’s regular entertainment in the bar – plus tennis and minigolf in the grounds.

Social and dining venues include a restaurant and a bar with pool table, as well as evening entertainment several nights a week.

Amenities and services available to guests include 24 hour reception and currency exchange. There is also safe deposit boxes and a laundry room (all with local charges).

C’an Sanso Studios is only 200m from a small sandy beach, 700m from the sandy beach of Cala Pada. It is around 1.5km from the centre of Santa Eulalia, where there is a further beach and many shops, bars and restaurants. A supermarket is just 20m away. The complex is on the road linking Es Cana to Santa Eulalia so there may be some traffic noise.

Ibiza Airport is approx 14km from the resort of Santa Eulalia.